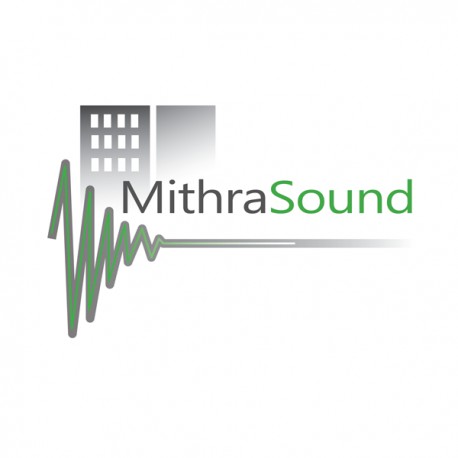 Software for the simulation of soundscapes in urban environment

MithraSOUND is a unique tool capable of restitution of exterior soundscapes in a hyper realistic manner. Integrating 3D visualizing of the modelled site, it permits coupling of quantitative simulation data to an immersive listening experience. A tool for design, cooperation and a decisional aid, it is the ideal software to finely evaluate the acoustic impact of development projects and for comparing different projected scenarios.

MithraSOUND integrates both transport noise (light vehicles, utility vehicles, tramways) and a large library of urban sources (fountains, cafes, equipment, etc.) that can be further enriched by the user. The urban sources are modelled either by fixed sources, point sources or linear, either by mobile sources along a trajectory, or in the form of residual noise.

The simulation of transport noise employs an integrated real time traffic engine that permits taking numerous parameters into account, such as management of priorities at intersections, speed limit zones and of course average speed flows. The movements of each vehicle is thus finely modelled.

Relying on a patented method issuing from CSTB research, MithraSOUND generates vehicle noise in real time and in a highly realistic manner. In particular, cars and utility vehicles including engine noise linked to engine speed, itself depending on the gear used, and including the tyre/road interaction noise. These two noises are generated in real time based on the change in speed of the vehicle, giving the numerous accelerations and decelerations present in towns.

The acoustic calculations utilise the in common cartography computation engine of MithraSIG which implements most of the standardised methods for predicting noise in an external milieu (NMPB 2008, ISO 9613-2, Cnossos-EU). The significant propagation effects are thus taken into account in predicting the exposure levels and the auditive simulation. In particular, the propagation paths between a source and a receiver are calculated using a rapid ray tracing algorithm coupled with the taking into account of the acoustic propagation effects (reflections from buildings, ground effects, road surface type, diffraction via screens).

During a simulation, MithraSOUND calculates in real time and records the evolution of the instantaneous sound levels, as would a sound-level meter. The ensemble of standard indicators used to characterise temporal evolution of exposure levels are thus available, in particular the maximum level LAmax or the statistical levels LA10, LA50, LA90.

For a better immersion in the scene, MithraSOUND equally offers several audio renderings to return the soundscape.

Moreover, a restitution calibration procedure guarantees the validity of the levels returned if the user so wishes.

MithraSOUND issues from CSTB research in the domain of external sound levels prediction and auralisation. These techniques were initially implemented in a site noise simulator developed for Bouygues TP, By-OASIS. Following this, the coupling of the traffic engine and the synthesis of engine noise and road interaction synthesizer were integrated into the tool and used for the first time by the Conseil Général du Nord with a view to public consultations concerning road improvement projects.

Access my calendar and choose a date and time: My schedule